COPING WITH THE THIRD WAVE OF COVID-19

How to ease your customers' worries over potentially contaminated premises? 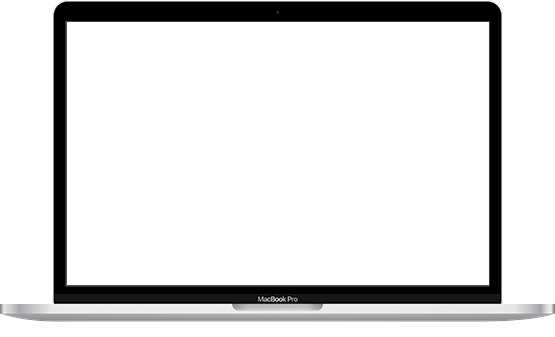 Avoiding closed spaces, crowded places, and being in close-contact settings during the Covid 19 crisis reduce the risk of being infected or infecting others with the Coronavirus. To ensure business and service continuity while not risking Covid 19 transmission in your facilities, it is critical to get the rooms disinfected and decontaminated.

Yes, I am interested to find out how the SteraMist can give me peace of mind!

There are actually two very simple unequivocal reasons why traditional disinfectants that are applied in conventional ways are inherently and completely inadequate to deal with surfaces that have been contaminated with a highly contagious, virulent and lethal virus such as the COVID-19 virus. 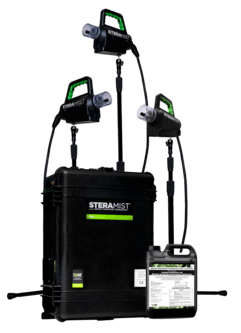 Conventional non-residual disinfectants can only destroy pathogens during their initial wet contact time and are only effective when the proper dilution rate and method of application are strictly followed to ensure the necessary contact time is achieved. This accuracy needs to be replicated 100% of the time, every single time. Anything less than a perfect application process will inevitable deliver sub-optimal results.

The two usual methods of disinfectant application are ether by cloth or by spray. Their mechanical deficiencies will be highlighted in turn. 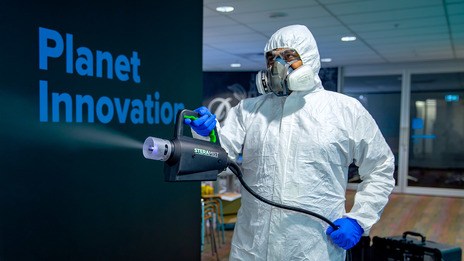 In order to eradicate the COVID-19 virus from each and every surface where it might be present a far more radical approach is required, an approach that can consistently deliver a 99.9999% or Six Log Kill Rate. Steramist delivers exactly this outcome, rendering treated surfaces not just ‘clean’, not just ‘sanitised’ not even just ‘disinfected’, but instead, a surface that (by internationally accepted microbiological standards), can actually be described as ‘sterile’. This total eradication and elimination of the COVID-19 virus (and all other micro-organisms present) therefore renders each and every treated surface completely safe and totally free of all pathogenic organisms including COVID-19.

1. What actually makes Steramist so efficient?

This is how Steramist tackles the two combined deficiencies described above (chemical inadequacy coupled with mechanical inefficiency).A liquid solution of hydrogen peroxide (H2O2) is nebulised into a very fine aerosol mist which is then passed under pressure through a cold plasma arc. The plasma arc endows the very fine aerosol droplets of Hydrogen Peroxide with an added ionic charge.

This effectively ‘supercharges’ an already effective disinfectant into a highly potent sterilization agent with a proven and unparalleled 99.9999% kill rate. Dr. Manmohan Yadav, AGI’s Virologist, described this innovation in the following way “Steramist takes a disinfectant that is already highly effective, and then places it on steroids”. He added, “its efficacy is so profound and its speed of application so quick and easy that it now makes traditional formaldehyde, vaporized hydrogen peroxide, glutaraldehyde, & titanium dioxide treatments obsolete.”

The reason that the ionic charge makes the aerosol droplets of Hydrogen Peroxide so effective is that the ionic charge (which can be considered similar to a magnetic polarity) now enables the droplets to be physically and magnetically attracted to the actual surfaces of the virus itself. This provides the Hydrogen Peroxide with an added ‘Hunter Killer’ characteristic that multiplies its efficacy several-fold.

2. Can anyone apply Steramist to surfaces?

Approved Group International is the only treatment contractor in Malaysia that is capable, competent and professionally equipped to undertake such specialist sterilisation procedures.

3. Because it is so much more efficient, is it more difficult to apply?

Steramist has a very rapid 5 second application time yet covers every conceivable nook and cranny of the area being treated, eliminates infection risks, is non corrosive and bleach free and is safe for electronic equipment. After treatment, it requires no rinsing and leaves no residues as all the ionized droplets convert to oxygen and water vapour.

"If you're looking for a great resource to educate yourself on sanitisation and learn what's needed to have a safe environment, Approved Group International is who you should be contacting."

"Good, professional, and accommodating service! Would recommend to anyone."